I've FAILED! Here's why you should too 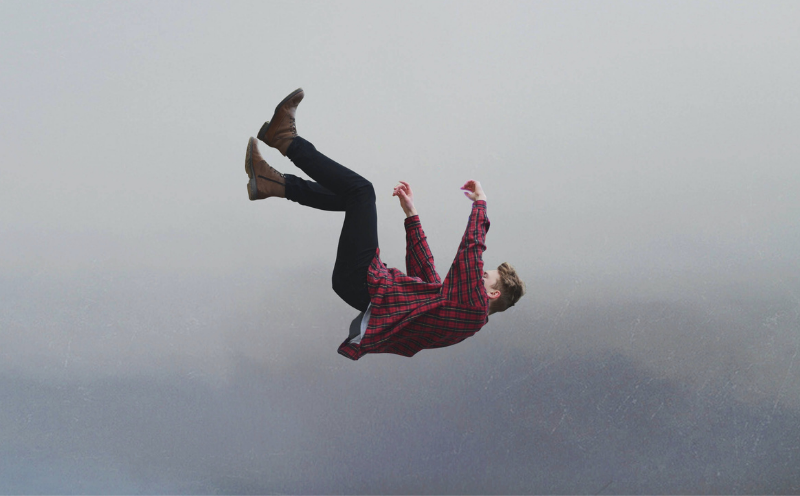 I did something recently, after lots of planning. Although lots went really well, some bits didn’t. Whereas that might usually make you sad, I am trying to turn that around. De-sensitive failure and use it as a positive force. Heck, I even set up a Failure Club to celebrate it! Your takeaway: don’t worry about failure, expect it, embrace it and use it to drive you forward.

What went wrong then Richard?

Do you know what the failure bow is? No, not bow as in arrow, but bow as in bough. Like the tree. That bends over and stands back up again. If you have ever flicked on the television during the Olympics when the gymnastics is on, you will have seen it. As a young, fit, blur of a person sprints across your screen, bearing down on a pommel horse and launches themselves into the air, you can’t help feeling impressed by the sheer skill involved. It’s certainly more than I can do.

Do you feel as exhausted as I do just watching it? Yes.

Does it work every time? No.

Do they slink off when it fails? No.

Every time. Without fail. They take a bow.

Matt Smith called it the Failure Bow and talked about it his TED talk ( !The Failure Bow: Matt Smith at TEDxBellevue ).A friend of mine explained that it’s not confined to the land of chalk and small clothing, other sports have it too. He was a coach in his spare time and reported that new recruits to the world of rugby were trained to as well, by repeating the phrase…

after anything that didn’t go well. If you tune into rugby games where they have microphones on the touchline, you can apparently hear many players repeat this mantra like a kind of ingrained routine they roll out any time a scrum collapses prematurely or a line out fails. Whatever those actually are.

I was curious. How come two sports, working independently, created this way of addressing failure head-on, removing its power and moving forward? Does software engineering have the same concept and do I? Roll on a week and I got an opportunity to experience this first hand. I failed and it was great. I want to do it again and you should too.

As a company, we work on creating software teams and integrate these into public and private sector organisations, looking to deliver value and innovation to their customers and users. We also have an internal kickstarter program, for our colleagues to recommend products we can delve into further, either for us or our customers.

Last week, as an experiment, we spent the whole week working through the first five ideas. and also attending We attended various workshops, guest interviews with people outside of our company and watch-a-long video sessions all on a strong innovation teams. It’s the first of our innovation hack-a-thons that we want to repeat all the way through the year. It fosters great conversations and bonds between our colleagues, and also introduces some wonderful new ideas that allows everyone to learn and reflect on their day job.

Sounds great…erm, how did it go then?

Well, that was the plan. Mostly. Some of it was great. Some was not. Parts failed and I felt I had failed.

With the Failure Bow in mind as I scrolled through the retrospective notes, I thought about how best to approach this for the next event, whether it would even happen. As an Agile Coach, the retrospective is the one part I would fight tooth and nail to keep if somebody forced you me to get rid of everything else. However, that is only really half the battle, you then have to action those action points collected. In more traditional project management methodologies, recording ‘lessons learned’ is a major activity, some even moving to calling call them ‘lesson identified’ instead. If you haven’t tried again and done something different, have you actually learned to do something differently?

“Well, the first one isn’t ever going to be perfect is it, you won’t get everything right first time!”

Who ever does, I wondered to myself, when a colleague was chatting to me about how the week had gone. Rather than the oft-repeated mantra of ‘fail fast, fail often’, we had collectively taken the whole company a whole week to fail. How was I going to respond to that?

Luckily, as an Agile Coach, we have a framework for everything. When you get to the end of anything, always keep in mind:

What did you learn from doing that?

What will you do differently next time?

I try to see every work experience as a learning opportunity. Paraphrasing Jeff Patton:

“What can you build to learn instead of building to earn?”

I organised and ran the whole innovation week knowing we were going to do another one later on in the year. The only way to find out what would work and what wouldn’t was to try it, experiment and see how that went.

I didn’t want to to shy away from the failures, I wanted to highlight them, call them out in the retrospective and celebrate the fact that they actually happened. Not everyone has that as a default behaviour though:

“Oh, it’s such a shame that session didn’t work, you must be really disappointed with the way that went.”

True, in my heart of hearts, I would want everything to work 100% of the time, but my brain knows that’s not going to happen. I am expecting failure, I just don’t know where it will come from, but I need to capture it and work on fixing it. How can I get others to do the same? Celebrate it. Reward it. Enter, the Fail Club.

Soon, I am going to be holding the inaugural first Company Fail Club. Anyone can come along, with the best psychological safety handrails, it’s a safe space for my colleagues to talk about something they tried, how it went, what they learnt and what they could do differently. The best example of learning wins. Turns out, a few other people have done the same, even the World Bank → https://blogs.worldbank.org/edutech/failfaire-internal

Together we are harnessing the power of hindsight to prove to everyone in our company and to all of our customers that we embrace this as part of our culture and can help you to do the same. Heck, if it goes well, I might even set up a public anonymous session for anyone to come along to.

The only way to learn is to fail first of all all. Freeman’s Law. Quote it and let me know how you get on, what you learned and more importantly, how you are going to do it differently next time.

Now, hand me my lycra and point me towards the pommel horse. I feel a failure coming on and I LOVE IT!

hosted superbly by the lovely team at GitHub Pages

created by a fabulously easy to use set of Jekyll templates from Barry Clarke.

and finally, polished with insightful editing support from our social media and marketing wizard Euan Whitbourn.